This article explains about the operational history of one of the German Divisions that served in Romania during WW2 that for a time came under the command of the 3rd Romanian Army. The 153rd Grenadier Division (German: 153. Grenadier-Division), sometimes referred to as 153rd Infantry Division (153. Infanterie-Division) in Wehrmacht documents, was an infantry division of the German Heer during World War II. It’s primary function had been to train troops going into theatre on local rules, laws and areas to avoid, as well as familiarise troops with both allied and enemy weapons, forces and tactics. Crucually Division Nr. 153 came under the command of the Romanian 3rd Army during its time following the retreat to Crimea, and primarily acted as Ausbilders (Instructors) for the Romanians, training them on German weapons and tactics; following the December 1941 refit of the Romanian Army, these Ausbilders were crucial to training. Below shows footage of the Ausbilders training Romanian soldiers in 1944.

I have also presented information about a single member of the Division who served within the 153rd to contextualise the individual fighting soldier. Included is the story of Otto Vitus Ostermeier, a Obergefreiter Kradmelder who served in Division Nr 153.

The story of Otto Vitus Ostermeier

Otto Vitus Ostermeier(born 9th April 1907 in Pilsting) was a Obergefreiter Kradmelder (Motorcycle dispatch rider) who served in Division Nr. 153. Serving in Poland and France with Division Nr. 153, he was wounded whilst on duty and transported to the Kremenshug War Hospital, Ukraine on 20th April 1942. He then carried on to serve in Stalingrad, and the retreat across Crimea, Kuban and the following fight into Romania. On the 23rd April 1944 he was captured in Romania during the retreat from Besserabia, and was held in the Buzau Prisoner of War Camp, Romania, with his last appearance being seen by his comrades on the 28th August of the same year. He was still being held as a PoW on 6th September 1949 when the inmates of Buzau Camp were released; sadly Otto never made it home, presumed dead inside the PoW camp. Whilst serving in Division Nr. 153 Otto received the Iron Cross. The image below, kindly provided by Marianne Ostermeier, his daughter-in-law, shows Otto (right), relaxing with his comrades. 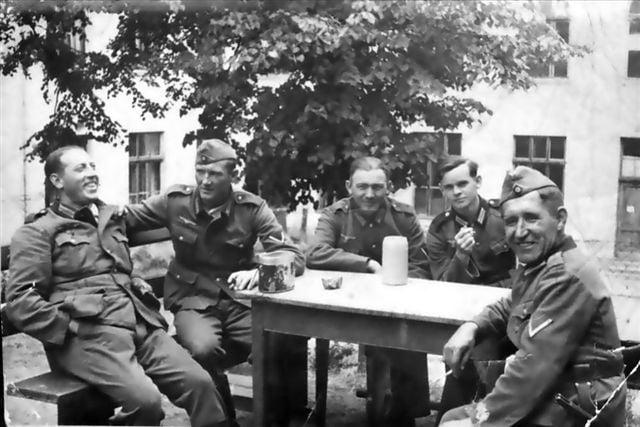